Chamomile the high end clothing and handbag retailer is planning to expand in Italy with new store openings across Italy. For Spring 2011 store openings are planned at different airports namely Bari, Bergamo and Verona, with the opening of a large outlet in March at the marine station in Naples, a magnificent location in this city in the south of Italy.

Mario Pierro, head of franchising at Chamomile Italy, who is the son of Luigi the founder and CEO of the company explains that the companies main aim is to have more than 200 stores by the end of 2011. Currently, Chamomile has 150 retail stores in Italy. 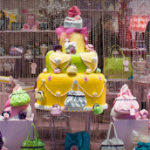 Are you still looking for the perfect Italian made bikini for summer? You could find it in just a click from Parah, an Italian company with a long hisotry in the lingerie business, has just launched an online boutique to showcase their wonderful collections. In fact, the parah.com site has many new sections, where you […]

They will run for 150 days to commemorate the 150th anniversary of the unification of Italy. The unusual adventure will be attempted by two people from Aosta: Francesco Ceseracciu of Pont-Saint-Martin and Maurice Pitti Donnas. The two Italian runners will start tomorrow, Tuesday, ‘Jan. 4, at 10am from Pont-Saint-Martin. Every day, until June 2nd, the […]