You are here: Home / Culture / Italian women are among slimmest in the world

Over the past thirty years the people around the world have put on some extra pounds: from America to Japan, one adult in ten is obese, a figure that has almost doubled since 1980. A problem that affects women more than men, the only exception to this is the “increasingly slim” Italian woman.

Leading the world in bigger men is the U.S., followed by Western Europe, UK, Malta and Turkey. The data was revealed in a study over the last twenty years and conducted worldwide in the prestigious medical journal Lancet.

The unique case in Western Europe is Italy, in 28 years the BMI in women has dropped, meanwhile it has increased slightly in Belgium, Finland and France. The body mass index of Italian women (BMI, a measurement based on weight and height) – according to British newspaper – was 25.2 in 1980, just above the line indicating the state of obesity (25), but decreased in 1990 (24.9), falling further in 2000 and 2008 (24.8).

So Italy says “goodbye” to the curves of Sophia Loren instead prefers the physical Elisabetta Canalis. The explanation is not only diet though: “The first factor – the professor told AFP Pietro Migliaccio, president of the Italian Society of Sciences Food – could be the increase in the  height of Italian women, while at the same time remaining at a constant weight, which would make possible a reduction in IMC. ” 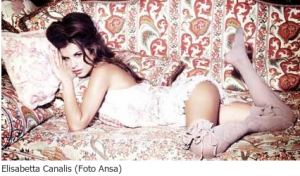 VENICE, Italy. They have arrived by car right under Rai Broadcasting offices in Venice, Italy. It ‘s the “stunt” of four youths from Jesolo Beach, who have resulted being a bit drunk. Last night in Venice this event triggered an alarm over a feared terrorist attack. When in fact, at around 4.30 am, their grey […]