You are here: Home / Music / Mondo by Cesare Cremonini Best single for 2010 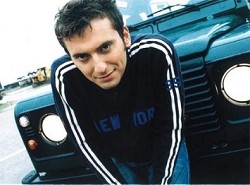 It has received the award for best single 2010 on iTunes. It is the single ‘Mondo’ of Cesare Cremonini, who received a platinum disc with his ‘1999-2010 The Greatest Hits’ album that includes the award-winning single. The music compilation traces the ten-year career of the singer-songwriter from Bologna and who had a great success with Special ’50 ‘,’ Qulacosa di grande ‘,’ Io ‘,’ Un giorno migliore ‘,’ Latin Lover ‘,’ Say So ‘. It is, already a 2010 full of great hits for the artist, Malika Ayane’s boyfriend. So Cremonini achieved with a single vote the dual goal of platinum and best single of the year.

The album ‘1999-2010 The greatest hits ‘ came two years after ‘Il primo bacio sulla luna’ and after two triumphant tours that have proclamed Cremonini as one of the most complete artists of the Italian music scene. ‘Mondo’, one of two previously unpublished collection of ‘1999-2010 The Greatest Hits’, is accompanied by a video made by Luca Mariani with the technique of PiP motion, i.e. a series of movies with sequencing of photos.

In the cast are Jovanotti, who works on the track, but also many long time friends of Cremonini. Do not miss people very close to him as his mother, his best friend Nicola ‘Ballo’ Balestri and his long time producer Walter Mameli. The video for this new single has taken four days of work in Bologna and another two in Milan. Not only were involved hundreds of people for a photo shoot during which each was portrayed in different situations. Basically a video in the video. A very simple design but also very interesting.

Italy: A new TV show will start in April, called in a ridiculous, ironic and irreverent way “Bunga Bunga Show.” A variety that is linked to the tradition of cabaret comedy programs like “Drive In“, “Indietro tutta”, “Quelli della notte..”. The scene will be dominated by the actors who will take their idea from the […]

Exclusive lingerie lovers have been lucky: December 23rd , just in time for Christmas, the collection, which Jean Paul Gaultier has created for the prestigious house of La Perla underwear, has arrived in Italy. “Créateur Collection” is the name of this collection of couture pieces with seductive “waist cincher” corsets, high knickers which wrap the […]