You are here: Home / News / Baby left to die in car wife says it could happen to anyone 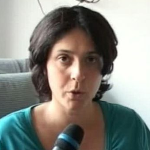 On Saturday night on the 21st of May died a small baby (Elena Petrizzi,) of only 18 months when she was left for 5 hours by her father in Teramo in the Abruzzo region of central Italy. The baby ended up in an irreversible coma probably caused by the heat and left of time that she was left in the car. The announcement of death was given by the Health Department of Maternal and Child department of Salesidi Ancona.

Her brain was declared dead from 5pm onwards but was kept under observation for six hours until the baby was officially declared dead. The baby had never gone beyond the state of coma, despite an operation to reduce a large cerebral edema which was carried out in the last hours.

Family members gave their approval to the donation of the babies organs. The babies father, a professor of veterinary surgery at the University of Teramo, has been charged with abandonment of a minor. Now he will face charges of manslaughter.

The father was convinced that the baby had been left at the nursery. “What happened to Lucio (the father) could happen to anyone” said the wife Chiara Sciarrino…

Perfect for carry your essentials to the beach this summer. These great looking bags are available in five crazy colours: Yellow, Coral, Blue, Black and off-White definitively a “must have” at the week-end in preparation for the great summer exodus (hopefully sooner rather than later). On store is located in Riccione near the famous beach […]

Italian is the language of art, culture, cuisine and fashion. One of the best places to learn this beautiful tongue is Bologna – a large, medieval city located in northern Italy with a big student community, rich nightlife and deep cultural traditions. Why Choose Bologna? The are pleny of offers for practical language courses for […]