You are here: Home / Shopping / The World’s Greatest Easter Eggs 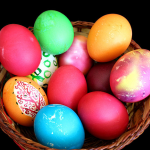 If you are preparing for Easter and examining the extensive range of Easter eggs on offer you are probably considering investing in a reasonably modest chocolate egg from a well know confectionary company. Any egg makes a lovely gift but occasionally some really special eggs are unveiled to the world. They are highly likely to be beyond your budget but here are some superlative eggs which would have made very impressive gifts.

The largest chocolate Easter egg ever made was produced by Tosca from Italy. It was exhibited and measured at Le Acciaierie Shopping Centre in Cortenuova, Italy on 16 April 2011. This behemoth was 10.39 m tall, had a circumference of 19.6 m and weighed in at a staggering 7200 kg which is heavier than an elephant! It would have made a spectacular gift if you could have afforded to buy it and had somewhere to put something that is taller than a giraffe! A typical Easter egg weighs less than 300g and so the record egg was the equivalent of over 24,000 regular chocolate eggs.

The most expensive chocolate egg ever sold was the Diamond Stella Egg displayed at La Maison du Chocolat in London in 2006. The egg was studded with 100 half carat diamonds and was priced at $100,000.The 25 cm tall egg was crafted in Paris and took three weeks to make before the gems were placed onto the surface in London. Marginally more reasonable was the non-jewelled chocolate egg designed by British chocolatier William Curley in 2012. The piece was named the Golden Speckled Egg and weighed in at a monster 50 kg. The hand-made egg took three days to complete and was fashioned from Venezuelan Amadei chocolate which is considered to be the best in the world. The Golden Speckled Egg was sold in the Fabergé Big Egg Hunt charity auction and was purchased by investor Cyrus Vandrevala for £7000.

The Most Expensive Egg Ever

It will not come as great surprise to hear that the most expensive egg in the world was a Fabergé piece. Russian jeweller Peter Carl Fabergé made some 75 jewelled eggs between 1885 and 1917 and this one was created for the Rothschild banking family in 1902. The Rothschild egg was also a timepiece with a diamond-set cockerel which appeared on the hour. When sold by Christies in 2007 for £8.9 million it became the world’s most expensive egg, clock and Russian artefact all at the same time. It was purchased by Alexander Ivanov who owned Russia’s first private museum.

Chocolate eggs make perfect Easter gifts and happily you do not have to spend a fortune to buy a nice example (unless you like the idea of covering them in diamonds).  Easter does not have to be all about eggs, however, and if you want to treat someone special in your life chocolates, spring flowers and Easter bunnies also make lovely presents.

New in the Xqb fashion store situated in the Italian outlet located in northern Italy close to Jesolo, are new collections from Jeckerson, Polo Shirts, Polo Ralph Lauren, Men’s & Women Cheap Monday jeans and the T / shirts just arriving in the stores for fall winter 2011/2012 check out www.cheapmonday.com to see the entire […]

The Biennale of the Mediterranean has given the city of Genoa a great range of cultural events that have attracted thousands of visitors. Under this initiative, which aspires to become a regular event over the years, is the art exhibition “Mediterranean. From Courbet to Monet to Matisse ” at the Palazzo Ducale, a unique opportunity […]