You are here: Home / Archives for moschino 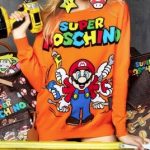 Moschino unveils a new project called Super Moschino, developed in collaboration with Nintendo to celebrate 30 years of Super Mario Bros. After the collection starring Barbie, Moschino presents a new fashion line which is composed of T-shirts and sweaters in intarsia wool, characterized by graphic the video game hero Super Mario. There is also a […]

Environmentalists cheered the decision of the Council of the Ministers has confirmed that it stop using plastic bags, which will come into force on 1 January 2011, with no extension: “It ‘s a major innovation, introduced by the government – said Minister Stefania Prestigiacomo, who objected to the introduction of yet another extension – which […]

Bottega Veneta the Italian brand launches their men’s and women’s Cruise collection for the 2015/2016 season. Bright colours that stimulate the senses and seduce are the name of the game. Lightweight examples ideal for the summer season were on show. A male and female wardrobe that invites you to escape the hum drum of urban […]