You are here: Home / Travel / Agrigento: A Great Destination For Those Interested In History 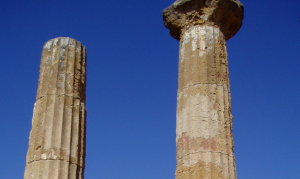 A main attraction to visiting Italy is the grand, historical Roman Ruins.  Places like the Roman Forum and Pompeii hold the keys to historians understanding the Roman Empire, and how it shaped Europe.  There are many ruins throughout Italy, some more grand than others, and some not so well known.  The many Roman ruins of Agrigento and well worth considering visiting if you are interested in ruins that show a clear transition from the Greek rulings to the Romans.

Agrigento is situated in Sicily, and many ruins lie hidden amongst modern aspects of the city. Though popular for the array of Greek temples that stand on a local ridge, Roman occupation also produced a cave sanctuary, the Tomb of Theron, several necropolis and the Villa del Casale, which boasts the most exquisite and finely preserved examples of mosaic embellishments seen in Roman structures.   Agrigento lies near the southwest coast of Sicily and guests may venture to the community by bus, train, taxi, ferry or flight.

The evolution of Agrigento’s rulers:

The Greeks established the ancient community sometime around 580 B.C. and was then known as Akragas. Romans conquered the community during the in 210 B.C. and renamed the area Agrigentum. Under Roman rule, the city prospered and at one time boasted a population of over 200,000 residents. All became Roman citizens following the demise of Julius Caesar in 44 B.C.

With the fall of the Roman Empire, the Ostrogothic Kingdom of Italy and the Byzantine Empire acquired control of the city. The name of the city evolved into Girgenti during medieval times and officially adopted the name Agrigento in 1927. Heading over to the Valley of the Temples, visitors get a glimpse of Roman culture blended with the heritage of the Greeks and Byzantines.

Sights to look out for:

West of the Temple of Concord, the one remaining preserved structure on the entire site, lies the garden of Villa Aurea and the location of a catacombs called the Grotte di Fragapane and the Necropoli Giambertoni.   Past the main temple site stands the Tomb of Theron, a large pyramidal shaped rock monument that researchers believe commemorates the Roman casualties of the Second Puric War.

Approximately 1.5 kilometres beyond the Temple of Vulcan, visitors follow the bends in the road and arrive at a gate that signifies the Hellenistic-Roman Quarter excavation sites. During the 1960s, archaeologists uncovered these structures constructed sometime between the 3rd century B.C. and the 4th century A.D.   The large area represents four parallel sections that open to the north.

Each quarter features the remnants of numerous ancient dwellings and shops that exhibit Byzantine, Hellenistic and Roman qualities. Upon entering some of the structures, visitors encounter floors richly decorated with mosaic pictures depicting animals, plants and geometric designs. The community displays advanced services that include channels, sewer systems, tanks and wells.

A Europe tour might continue a few kilometres outside of Piazza Amerina, where guests find the unique Villa Romana del Casale. Constructed during the beginning of the 4th century, the massive complex includes an ancient village that slowly grew around the main villa. The stunning and well-preserved mosaic collection remains the largest on the planet. Created by highly skilled North African artists, the illustrations display everything from daily life to battles and mythology.

On Saturday night on the 21st of May died a small baby (Elena Petrizzi,) of only 18 months when she was left for 5 hours by her father in Teramo in the Abruzzo region of central Italy. The baby ended up in an irreversible coma probably caused by the heat and left of time that […]