You are here: Home / Travel / Enjoy a Real Roman Holiday

The city of Rome, nestled in the Lazio region of Italy, serves as the country’s capital and is also its largest city. The great thing about Rome, especially for tourists, is how the city is divided. There are a number of sections and each has its own attractions. The Modern Centre is located in the heart of the city and is home to the majority of Rome’s hotels and restaurants. Along with the multitude of restaurants, you can find plenty of shopping along the famous shopping street known as Via Veneto, it’s the Rome equivalent of London’s Bond street. Other attractions in this part of the city include the Trevi fountain and Castro Pretorio. 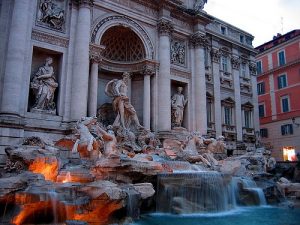 Old Rome is just east of the Modern Centre and contains the structures built during medieval times and during the Renaissance. There are a number of plazas to view as well as some beautiful cathedrals and a few restaurants sprinkled throughout this section. Perhaps its best known feature is the Pantheon, built originally in 27 B.C. by Marcus Agrippa. It has been rebuilt a couple of times in centuries past and has been remarkably well preserved since it was last reconstructed around 202 A.D. This beautiful structure is definitely a must-see.

Of course, what tour of Rome would be complete without a stop in the Vatican City? This section of Rome is actually a separate city state and features a myriad of sights to see as well as museums full of interesting relics and other items. South of the Vatican is the section known as Trastevere. This is a relatively simple section of the city with cobblestone streets and beautiful plazas. This is widely considered to be the artistic centre of Rome.

The North, the largest of Rome’s sections, features elegant neighbourhoods with gorgeous houses. The best known of these are Solario and Parioli. Also located here are the Spanish Steps. Adjacent to the North Center is the section called Nomentaro. This section is mostly neighbourhoods, but its standout feature is the amazing night life you’ll find in its San Lorenzo district.

Colosseo is another of the most famous sections of Rome. As its name suggests, this section is home to the Colosseum. This is quite possibly the most awe-inspiring structure in the entire city and is an absolute must-see. Along with the Colosseum, this section features many other structures from ancient Rome. The Capitoline is located here along with its museums. The Roman Forum, the Markets of Trajan, and the Forum of Augustus are also in this section and should not be missed.

Aventino-Testaccio and Esquilino-San Giovanni are the two remaining sections of the city. The first is the part of the city that you might overlook as it is mostly neighbourhoods, but there are a number of surprising things to see and some great cuisine as well. The second features an indoor market and the beautiful Piazza Vittorio Emanuele, the largest piazza in Rome. Also in the Esquilino section is the Basilica of St John Lateran. It is the oldest Basilica in Rome and is a grand structure that you’ll definitely want to see.

This weekend will be great rugby in Europe, the opening match take will place in Newport for what could be a Magners League scrap against Connacht. On Friday Treviso will play at Ravenhill in Belfast in a complicated but not impossible rugby match; in an other clashes the second Italian team Aironi, that are still looking […]

Macchiavelli ( the 15th century Italian philosopher and writer) used to say: Politics have no relation to morals! This is definetely valid for Mr Berlusconi. No matter what he does or say, people keep voting for him. Maybe for opportunism, maybe for blind faith or God knows why, but no matter what they throw at […]