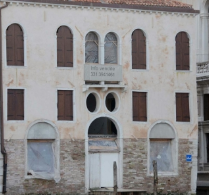 Johnny Depp, who is looking for home in Venice has made an offer of ten million euros ($13.4 million dollars) to buy Palazzo Donà Sangiantoffetti, a wonderful  seventeenth-century building on the Grand Canal that he had visited with his wife during the filming of “The Tourist”. “Venice is fantastic, magical – the actor said at the presentation of the film.

During the filming of  “The Tourist” in Venice, Depp the famous actor fell in love the building on the Grand Canal. To help the actor find the right place Proto Alexander Consulting was used, which is still at the negotiation stage. Depp,  top of the rankings of highest paid actors in 2010 compiled by Forbes magazine, beat an Arab prince who was also looking to buy one of the lastly available buildings on the Grand Canal. Sangiantoffetti Donà Palace, overlooking the Grand Canal at the back of Santa Maria Mater Domini and flanked by the river of the Two Towers in the Venice district of Santa croce.

Recently presented at the CAFA Art Museum in Beijing, the sunglasses collection from Prada which are called the Minimal Baroque Sunglasses Collection. A feminine pop-baroque style  for spring-summer 2011, the baroque style will be maintained all the way down to the color and originality, as explained by three illustrators, Ivo Bisignano, Marcela Andrea Gutierrez and […]

Thanks to Twitter Dolce & Gabbana and to Swid on Facebook we could browse in real time the backstage of the D & G fashion show in Milan, Italy which was staged yesterday. The shocking colours hit the eye. The eighties pop fantasy is created with the alphabet, lead motif of the collection that fills […]