You are here: Home / Travel / The Beauty of Piazza Navona, Rome 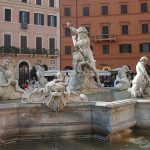 There are many places to travel while on a trip to Italy, but Piazza Navona in Rome deserves a special mention.

Piazza Navona is a favorite destination for most Hollywood directors, as it presents the perfect setting for a film shoot. Tourists on a trip to Rome must not forget to also visit Piazza Navona, just to experience the mix of the city square and the baroque Roman architecture.

It usually takes half a day to tour this city square area; there are many restaurants, shops, and buildings in its vicinity. Tourists love to watch the fountains at the square during the evening.

The Stadium of Domitian had a direct impact on the geographical contour of Piazza Navona. This stadium was a famous place of games for Romans in the ancient times. The stadium, also known as Circus Agonalis, came into existence in the 1st century AD. Today it is in ruins and lies beneath the Pizza Navona itself.

Piazza Navona became quite popular in the early part of the 15th century. The city market, which was earlier at Campidoglio, shifted to Piazza Navona due to its popularity amongst locals.

Looking to book a great deal on a hotel in Rome?  Check out hotelsclick.com

To me, the word Amalfi sounds like a dangerously decadent yet fluffy dessert that I would eat only on special occasions. In truth, Amalfi is the place name for a town in the Campania Region of Italy, and so the moniker is used for the entire outlying coast. There is a small town on the […]

Are you still looking for the perfect Italian made bikini for summer? You could find it in just a click from Parah, an Italian company with a long hisotry in the lingerie business, has just launched an online boutique to showcase their wonderful collections. In fact, the parah.com site has many new sections, where you […]