You are here: Home / Shopping / Winter sales in Italy & everyone is looking for a bargain! 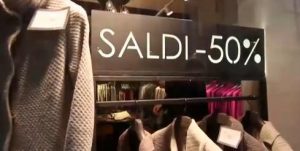 Pescara is the capital city of the Province of Pescara, in the Abruzzo region of Italy. The town centre was very crowded yesterday because of the first day of the winter sales, which will last until the 5th March. The sales on offer by the stores is as much as 80 per cent. Some of the offers are really amazing like one store that offered a shopping item from last years collection reduced from a whopping 1,400 euros to a super discounted 200 Euros. These large discounts are necessary because in Italy business owners pay an additional tax on unsold items (“invenduto”).

Once upon a time the sales were held in February, instead in recent years to be in line with other European countries the sales are now held in January. Unlike in the UK, “Sales” in Italy cannot be held at any time of the year but must be held at specific times which is usually decided by local government.

Fabrizio Chase, a shop owner in via Nicola Fabrizi. “The sales have been very good right from the off”, he also said “And I must say that the sales volume have upheld up to now”. At the Stefanel clothing store Sara Teodoro said: ‘it’s going fine’, “Our sales have started really well. Yesterday there were people who popped in to take a look and get an idea on purchases to be done the next day.”

Also in via Milano the feeling is that they have started on the right foot, said a salesperson from one of the Reffa shops, which are opposite one another. For the footwear store, Nadia Marmone States that “we cannot complain. Though in the morning it was a little slow. Those who came here, however, bought items that they had planned to purchase rather than pure impulse buys. Generally the season has not gone bad, “and among other things we managed to held only a small amount of stock”, recalls Marmone in reference to unsold shopping items. The general consensus is the the average price of the items is lower, but the important thing is that there is people willing to buy.

Even Antonio Landulf, a tailor, located in via Firenze, questions the start date, and argues that the Sales started too early. “Apart from that the sales are pretty much like last year.”

It’s born in Barolo (and how could it be otherwise?) the new WiMu-Wine Museum, the Museum of Wine, a ground breaking exhibition devoted to the nectar of the gods. Housed in the castle town of Falletti, the museum is a journey through the culture and the tradition of wine. A course designed by François Confino, […]