You are here: Home / Archives for italian football

AC Milan beat Sampdoria 2-1 to qualify for the semifinals in the Italian Cup (Coppa Italia), where the Northern Italian team will meet Palermo. The man of the match was Marassi ‘Pato scoring twice in 17’ and 22 ‘ minute. Some remarkable playing took place especially from the Brazilian player Accardi. In the second half […] 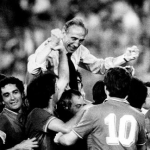 Enzo Bearzot, the man who led Italy into winning the Football World Cup in 1982 has died at the age of 83. Bearzot made started as a professional football with Pro Gorizia in 1946, then he played for Inter Milan, Catania and Torino. He ended his playing career in 1964 and he became assistant coach […]

Every winter millions of enthusiastic skiers head for the European resorts for their sporting holidays. The best known and most popular resorts in Italy become extremely busy with crowded pistes and lengthy queues for the lifts. Lift passes can be extremely costly and it is a major frustration to spend too much time queuing rather […]

Italian is the language of art, culture, cuisine and fashion. One of the best places to learn this beautiful tongue is Bologna – a large, medieval city located in northern Italy with a big student community, rich nightlife and deep cultural traditions. Why Choose Bologna? The are pleny of offers for practical language courses for […]